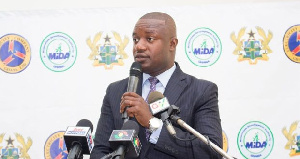 The Minority in Parliament has reported US$655 million of Ghana’s oil revenue can however not be accounted for by the Akufo-Addo administration, per studies by the Community Desire and Accountability Committee (PIAC) stories of 2017 and 2018.

In a presentation on Ghana’s oil sector by a Deputy Power Minister in the erstwhile Mahama administration, Mr John Jinapor reported: “Now, if you seem at the PIAC report, it tends to make it clear that there is a absence of transparency and accountability within just the oil sector, in phrases of accounting for our oil revenue”.

For instance, he stated: “During President Mahama’s time, we adopted the General public Money Administration Act and expended a chunk of that income on bodily infrastructural projects that come less than money assignments but underneath Akufo-Addo, they are paying much less than 50 for every cent of petroleum means on capital expenditure.

“What it means”, he pointed out, “is that US$655 million of the taxpayers’ funds has vanished into thin air”, introducing: “This is unfortunate”.

“We’ve raised it on the ground, we have demanded answers and nonetheless this authorities is evasive when it will come to this”.